The coworking place I inhabit puts on the Hackers and Founders event for Sacramento where “founders” come to talk to “hackers” about their startup ideas at a greasy hamburger joint down the street. Partially out of boredom and the desire for some free food (Hacker Lab will often sponsor meals), I attended.

What was most interesting was the apparent lack of original ideas. Every idea a “startup” proposed was based upon taking a service like Facebook and rebuilding it for a certain niche market. Not to mention nobody wanted to put any capital out themselves, which suggests they already know the value of their ideas. It reminded me of one of my favorite comics from The Oatmeal: 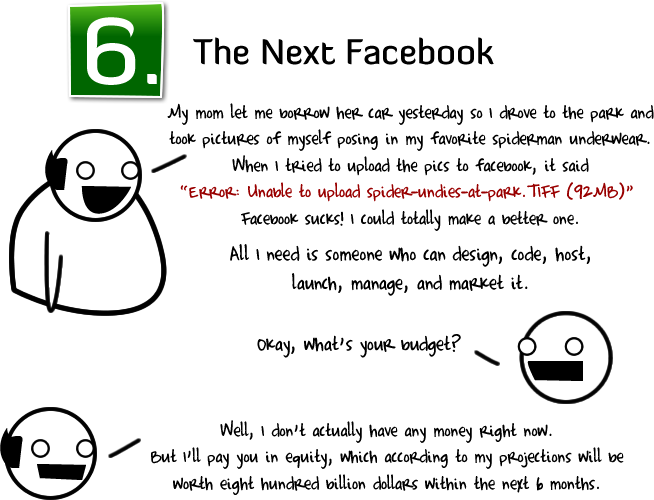 After about 3 hours of this flavor of contrived elevator pitches, I was handed the bill for my sub-par hamburger. Whoopee.

It’s easy to see why so many startups fail: individuals who do not know the market and have no connection to the real problem produce unoriginal “solutions” that just cause more problems than they solve. As such, many are unwilling to invest anything for they hardly believe in the idea themselves. If you have an idea, just keep in mind that successful products are ones that solve the real problem and are not made for the sake of making a multi-billion dollar organization based upon a knock-off of an already successful predecessor.

Sam Thompson is a web programmer and systems administrator who specializes in backend web infrastructure an server optimization. When he's not attending conventions, he is often found contributing to Open Source projects and helping out at Hacker Lab. He spends his free time taking pictures and calling himself a photographer on the side.